Guided by the strategic intentions for the Library articulated by the Dean of University Libraries, the Board’s purpose is to seek to strengthen the resources and capabilities of the Library in its role as a vital partner in student success and research excellence at the university.

The Library Board engages in three main functions in order to achieve its purpose:

Sandra Kruger is Executive Director of the Olmsted Linear Park Alliance, a nonprofit organization that is charged with the conservation of Olmsted Linear Park in Druid Hills. She is a Georgia native and lives in the Druid Hills neighborhood with her husband, Walter Kruger. Sandra graduated from Georgia State University with honors. She currently serves on the Board of Advocates for the GSU Library Special Collections and Archives and the GSU Alumni Association Board of Directors. Since 2004, Sandra served in numerous leadership and volunteer roles for the following: Decatur Cooperative Ministry, East Lake Women’s Alliance, Girls on the Run Atlanta, Decatur’s Martin Luther King, Jr. Service Project, Children’s Healthcare of Atlanta, The Georgia Conservancy and the Georgia Chapter of the Sierra Club. Sandra is a UGA DeKalb County Master Gardner and a member of the Atlanta Botanical Garden, High Museum of Art, Lullwater Garden Club, Chattahoochee Riverkeeper and Fernbank Museum of Natural History. In June 2019, Sandra received the Ambassador Award for her commitment and dedication to the GSU Alumni Association Board of Directors. Sandra’s personal achievements include participating in four marathons and fourteen half-marathons. She loves to read, garden, play tennis and hang out with her dogs, Molly, Grayson and Woody. 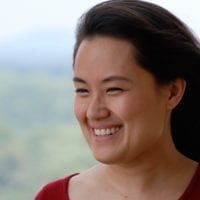 Yennhi H. Luu is a proud first-generation, Vietnamese double graduate of Georgia State University. She remembers how college was—big, confusing and passed by before she gained a steady foothold. In reality, however, the friendships and mentorships that she gained at Georgia State became a network through which she discovered herself and her place in the community beyond the campus.

A generalist student, Yennhi studied philosophy, Eastern religion, chemistry, the biology of death and dying, crustacean neurogenesis and extremist discourse in the Middle East during her time at Georgia State. She is presently moving into public policy and investment analysis, stemming from her present work for a financial planning company in Sandy Springs, Georgia.

As a Georgia State alumna, Yennhi knows to her core that the spirit of Georgia State is truly remarkable and precious and that one feels it most strongly in the discussions and debates in classrooms, cafeterias, libraries and office hours. College shapes lives. Yennhi is deeply grateful that Georgia State shaped hers. 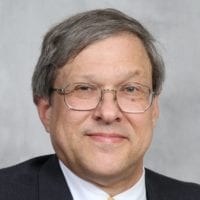 Charles Jones is a native Atlantan and current Board Chair of the GSU Library Board of Advocates. He received his MBA degree from Georgia State University and has been a university supporter since graduation.

In his professional life, he is the CEO of an Atlanta-based corporation and chair of a family foundation. In addition, he has served and currently serves on several business, non-profit, faith-based and university boards. He enjoys serving those in need, book collecting and reading and travels regularly (accompanied by Casey, a black Labrador retriever) when not working and volunteering.

Charles commented, “The University Library is not just a collection of books, it is the crossroads of multi-disciplined information at the university, serving not only the GSU community but also the overarching community.” He has a strong interest in Special Collections and the areas of transportation and local history preservation. He added, “The GSU Library Board of Advocates is a method of increasing awareness of the depth of the University Library and its case for support while bringing notable programs to the community.” 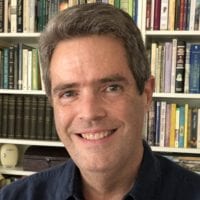 Over the course of a 20-year career in advertising, marketing and new media, John Adcox has held a number of titles including Executive Producer, Vice President of Digital Media, Creative Director, Vice President of Marketing and Creative Services and CEO. A few of his clients have included AT&T, Mercedes-Benz, Holiday Inn, Coca-Cola, UPS, SCANA, AutoTrader.com, Time Warner, Disney, Delta Airlines, 3M, Ford and many more.

In addition, he has hosted a radio show, acted professionally (although not since age 15), designed and written scripts for games, written a play for a professional theatre company, taught university astronomy and written articles on topics including mythology, psychology, technology, religion and marketing strategy.

His many, many interests include books and literature, religion and philosophy, mythology, the Arthurian legends, travel, baseball, science fiction and fantasy, marketing communications, Celtic music and lore, new media, theatre and politics, not to mention astronomy and cosmological physics.

John sits on advisory boards/boards of directors at the Blockchain Chamber of Commerce, Invest Atlanta and the Georgia State University Library. He served for more than four years as the Lay Leader and Council Chair at Inman Park United Methodist Church.

John Adcox is the founder and CEO of Gramarye Media, the story incubator—a disruptive book publisher, film studio, game developer and more. Gramarye is the first “mini-major” studio, complete with distribution, on the east coast, and the first funded by an SEC-compliant Security Token Offering. 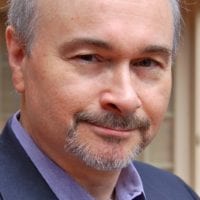 Jim Auchmutey (Class of 1977) is an author and journalist in Atlanta. His last two books are Smokelore: A Short History of Barbecue in America, the companion volume to the Barbecue Nation exhibition at the Atlanta History Center (which he helped curate), and The Class of ’65: A Student, a Divided Town, and the Long Road to Forgiveness, a story of race and reconciliation set in Georgia. He spent almost 30 years as a writer and editor for The Atlanta Journal-Constitution, specializing in stories about the South and its history and culture. He was twice named the Cox Newspapers chain’s Writer of the Year and was honored by the Robert F. Kennedy Journalism Awards, the Associated Press and the Sigma Delta Chi journalism society. Jim has also written extensively about food, co-authoring two cookbooks and winning an award from the James Beard Foundation for his food writing. He’s one of the founders of the Southern Foodways Alliance at the University of Mississippi. He lives in Atlanta with his wife and fellow board member, Pam Auchmutey.
Close 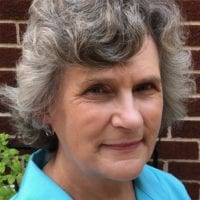 Pam Auchmutey (Class of 1976) was an award-winning writer and editor at Emory University for 34 years. She served as editor of the alumni magazines for Emory’s schools of nursing, public health and medicine and as a contributing writer to Emory Health Digest and Emory Magazine. She also worked at The Carter Center, where she produced a variety of projects for its peace and health programs. Pam graduated from Georgia State with a degree in journalism and began her career as a copy editor with The Macon News. She lives in Atlanta with her husband and fellow board member, Jim Auchmutey. They love traveling, eating BBQ, watching classic movies and TV episodes of Perry Mason, and doting on their cat, Peep.
Close 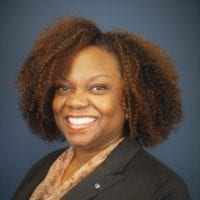 Ms. Bennett is the Assistant Project Director of the Title IV-E Child Welfare Education & Training Program under the School of Social Work in the Andrew Young School of Policy Studies. She is also a participant in the university’s Executive Leadership Academy for Women Class of 2019.

Shayla is an avid sports fan, holding season tickets for GSU basketball and football programs and a member of the Panther Athletic Club. In her spare time Shayla volunteers as a Writing/English Language Arts, and Social Studies GED instructor through her church; and works with her mother and sister in their family event planning & design business, Little Fancy Affairs. 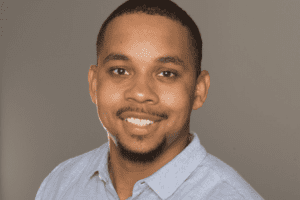 Brian Brown is an alumnus who has been a member of the Georgia State University alumni association since 2013. After graduating, he began his career in the Atlanta then relocated to Washington, D.C. to continue his career. He has extensive experience across government, technology consulting, growth strategies, and digital advertising. During his free time, Brian enjoys reading, exercising, and volunteering in the community.

Brian graduated from Georgia State University with a Bachelors of Science, in Computer Science and currently serves as Product consultant at Google. 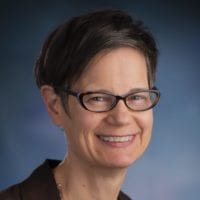 LeeAnne M. Richardson is an assistant professor of English at Georgia State. Specializing in British literature from 1880 to 1920, she teaches courses on the Victorian novel and poetry, turn-of-the-century literature and Oscar Wilde. Her research focuses primarily on women poets, New Woman writers and the transition from Victorian to Modern literature. She is currently working on a book manuscript called The Forms of Michael Field and is enormously grateful for the Georgia State University Library and its staff. The book’s research would not be possible without the wealth of resources that the library provides. 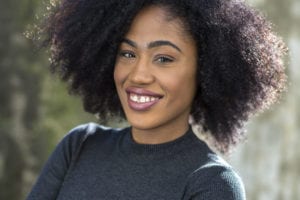 Shontel Horne (Class of 2010) holds a B.A. in English Literature. After graduation, she relocated to Los Angeles where she began a career as a freelance writer before pursuing a career in digital marketing and content strategy.

As a journalist, Shontel has written for outlets such as HuffPost, POPSUGAR, Modern Luxury and Forbes Travel Guide, with her work often focusing on the contributions of woman and Black Americans in industries where they are underrepresented.

In addition to working as a journalist, Shontel is currently the Senior Digital Producer for OWN: The Oprah Winfrey Network where she leads the online content strategy for emerging media, Oprah.com and OWN’s YouTube channel. She currently lives in Los Angeles. 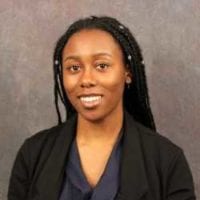 Kristin Smith graduated from Beaumont High School in Southern California before moving to Atlanta to pursue a degree in English Literature at Georgia State University. During her time in high school, Kristin was very involved with her community. She had an active part in organizing community service projects, served as a committee chair in her school’s chapter of the National Honor Society, was one of the founding members of her school’s Climate Committee, helped build, paint and move sets for the school’s theater program and trained student volunteers in the art of hospitality and crowd management to host the theater’s public events. Kristin had the honor of serving as both an event planner and mentor for Link Crew, a transitional program that helps freshmen integrate into high school by providing administrative, social and emotional support. There she began refining her skills as a leader and public speaker while proctoring a series of seminars that taught freshmen how to find a balance between their personal and academic lives. Despite her flurry of activities, Kristin was able to maintain a minimum 4.0 GPA and graduated Cum Laude. Kristin currently keeps busy by studying to keep her place on the Dean’s List (Fall 2018) and the President’s List (Spring 2019), working part time at Georgia State’s library, attending the Atlanta Student Investor’s Club’s (ASIC) weekly meetings and volunteering with her congregation every weekend.
Close 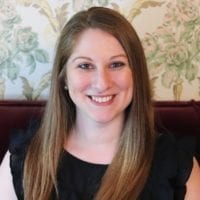 Melissa Swindell is a Georgia State University alumnus. Receiving her BA in history, she could often be found on campus at the Georgia State library conducting research through the use of the microfilm collection, archives and other resources. After graduation, Melissa went on to work for the Smithsonian Institution’s National Museum of American History. In 2015 she returned to Atlanta, where she continues to be passionate about public history. Today, Melissa is the Executive Director of The Wren’s Nest, a National Historic Landmark in the West End neighborhood of the city. In addition to her Atlanta roots, serving on the Georgia State University Library Board of Advocates holds a special meaning for Melissa, as her mother was a long-time employee of the DeKalb County Public Library System and from whom she learned to love and treasure the resources and people who make libraries a welcoming place for all.